Early morning sessions are always a challenge. They’re BC (Before Caffeine) and PCB (Post Cosy Bed).

This CafePD session was presented at the 2017 AITD National Conference (#AITD2017). There were 5 flip charts set up, each with a double shot piccolo cooling down underneath

The central flip chart got five circles drawn on it – one slightly larger one in the middle the other four in each corner. If you want to get the most value out of reading this article, you’ll need to grab an A4 piece of paper and follow the process described.

We’re going to look at 5 ideas, each one small, but with a kick to it, like a double shot piccolo. Each idea also has some associated bad maths in the hope that the cognitive dissonance of the maths will jar your brain into functioning at this hour. Each circle will increase in concepts according to what number it is.

Circle one, one concept …

In the first circle, draw two triangles, and shade in the outside space. This presentation was called Your CPD, but really, that language is a step too distant so in the middle of the star write MyCPD. Around the outside of the circle write one word – ownership. Nobody else is looking after your career. Your manager may have an interest in it, but only so far as it affects their career. It’s up to you to take responsibility for your career. In research done by Laura Overton from Towards Maturity in 2016 of learning and development professionals in the UK, over 90% agreed that they would need new skills in the coming years to handle the changes to the workplace (I figure the remaining percentage either didn’t understand the question or were lying). But here’s the first bit of bad maths. Write down 37% under this circles and mark it as wrong. Don’t just mark it as not-yet-competent! Get a red pen and put a cross next to it. This is the percentage of L&D managers who actually had a plan to deal with what they agreed they would need. This figure is just wrong. We’re supposed to be setting the pace in the field of career development, but only 37% of us have a plan!

Turn to the person sitting next to you, tap them on the shoulder and say “He’s talking about you”. The problem comes from what I call tradie syndrome – the plumber whose tap leaks, the mechanic with the dodgy car, the builder with the unfinished house, the gardener whose lawn needs a mow. The problem is that within a profession, our vision is so big that it paralyses us.

Having a big vision for your career development is good. Not having a plan isn’t. 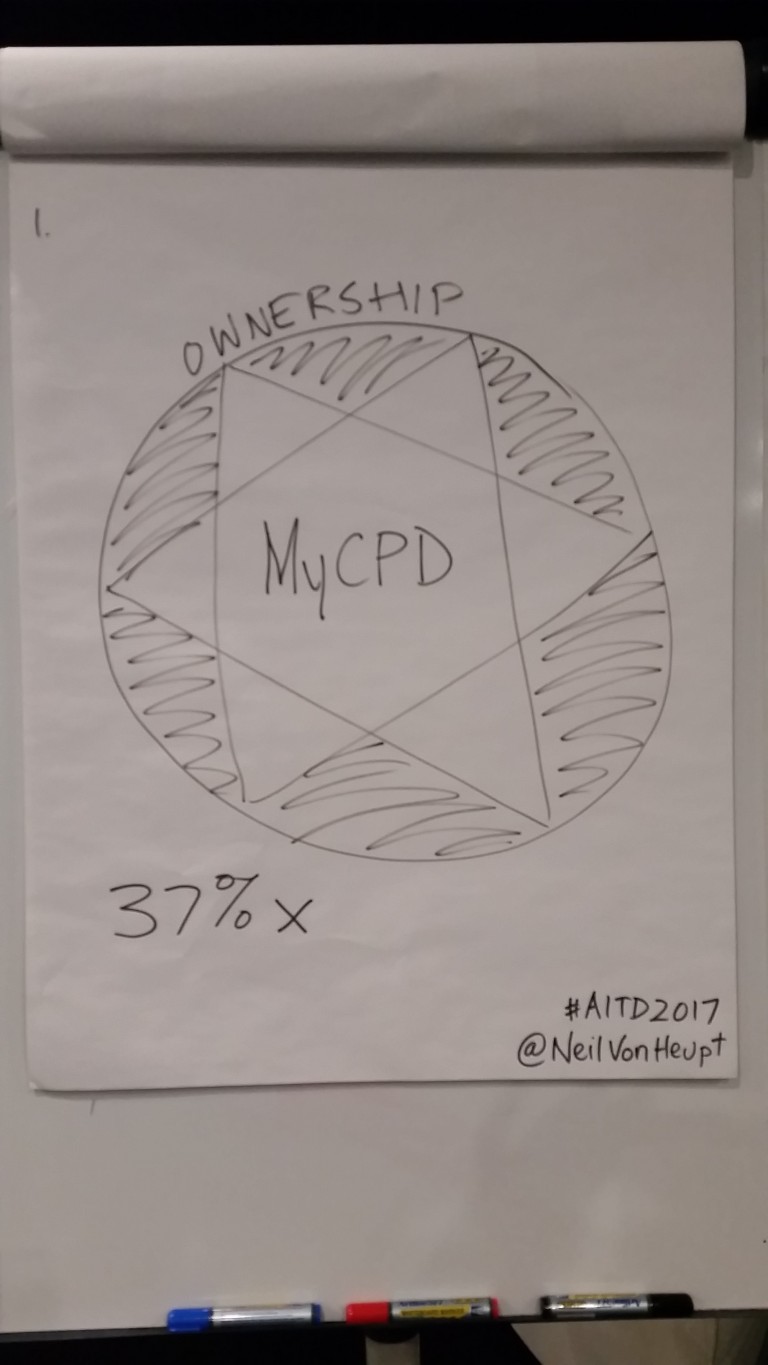 In the next circle draw two lines across the middle and don’t write anything between those lines. In the top half start an arrow at the edge of the line as though you are drawing a compass, but then bend the arrow and finish it. Draw the two other arrows like hour hands pointing at 5 and 7.

It’s circle two, so there are two concepts.

The first is direction (thus the bent compass arrow) and has a question with it: Where do you want to go? Your career is going somewhere (and that may be down the toilet or into a dead end!) but the good news is that you can change direction. The beauty of the shifts in the modern workplace from fixed, lifelong jobs to a fluid gig-economy is that it brings freedom to choose.

The second is priority and it also has a question (two actually): How long do you want it to take to get where you want to go, and how much time are you going to need to give it to get there?

The bad maths is just 2=1. Around the outside of this circle write DIRECTION (on the top) and PRIORITY (on the bottom). Two concepts, one common challenge which goes across the middle of this circle. Write MIND THE GAP across the middle (it’s a nice anchor to remind you of this presentation next time you’re on a train station). There is often a gap between where we want to go with our career and where we are going. There’s also often a gap between how long we want it to take and how long it is taking which can be caused by a gap between how much time we need to give it to get there and how much time we are giving it.

Mind the gaps. It’s your career. No-one else is looking after it.

Does anyone know what 1% of your day is in terms of minutes? 15 minutes. Here’s a question to write down next to this circle. 1% of your day. Is it worth it? 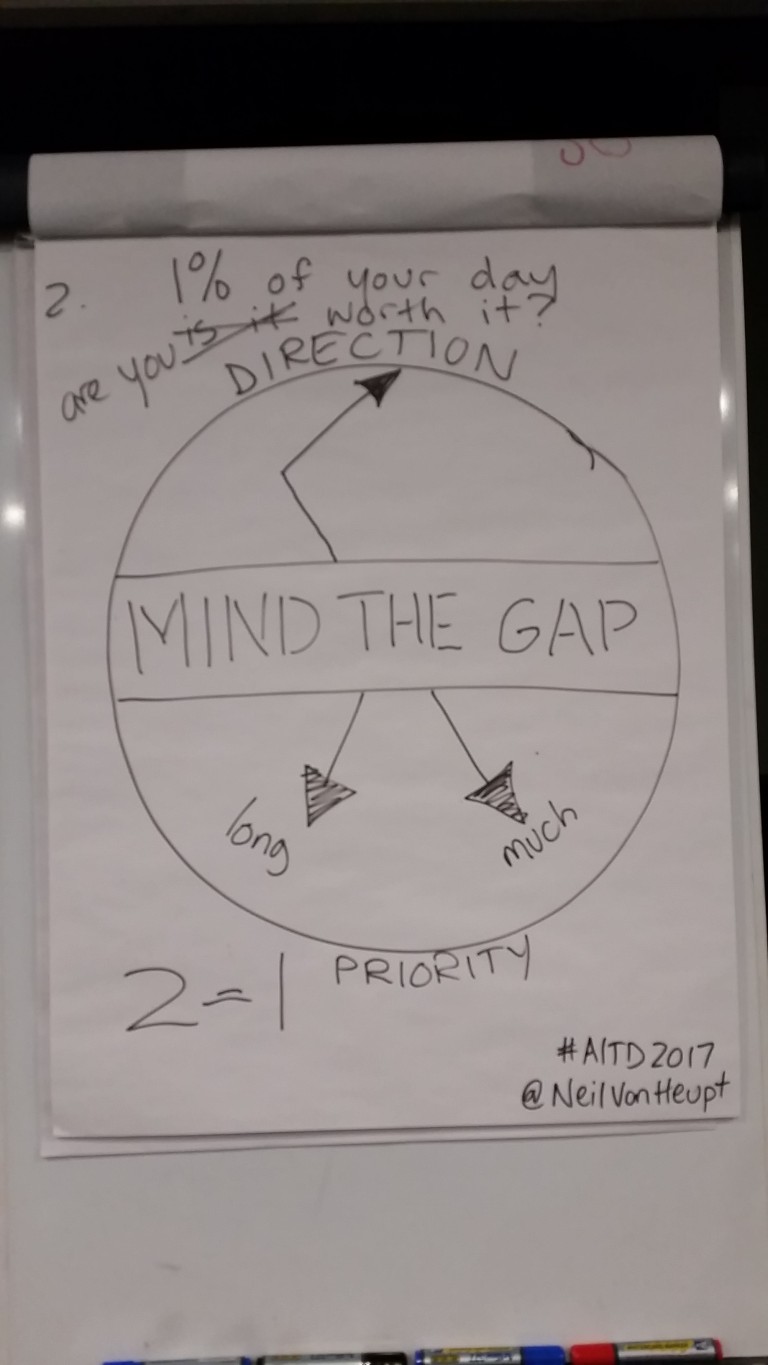 Before we get to the third circle we need to write down every bit of continuing professional development that you’ve done since the beginning of 2016. Write it into the spaces between all the circles. You have two minutes. I’ll start writing some of mine up to prompt your thinking and if you have something that I haven’t said put your hand up and call it out. Get as much down as you can as this will make the next two circles more effective. We got:

In the third circle write three sets of letters – EI, EF and ES. Around the outside of the circle write EXPERIENCE INFORMAL, EDUCATION FORMAL, EXPOSURE SOCIAL (note that in the photo I wrote the words against the wrong sections). The bad maths for this circle is 70+20+10 =/= 100. The reason this is bad maths is that it puts our attention in the wrong place – the breakdown, ratios or division between the elements, rather than the interaction between them, the combination of them. 70:20:10 is very popular, and it was originally conceived not to prescribe what should be but to describe what is, but it’s also now 10-15 years old and I think that it’s possible that it now describes what was, rather than what is.

So … the exercise with this circle, is to look back at all the continuing professional development that you have been doing, and to create a heat map by drawing tiny circles to represent where each of the things you did fall in this model. 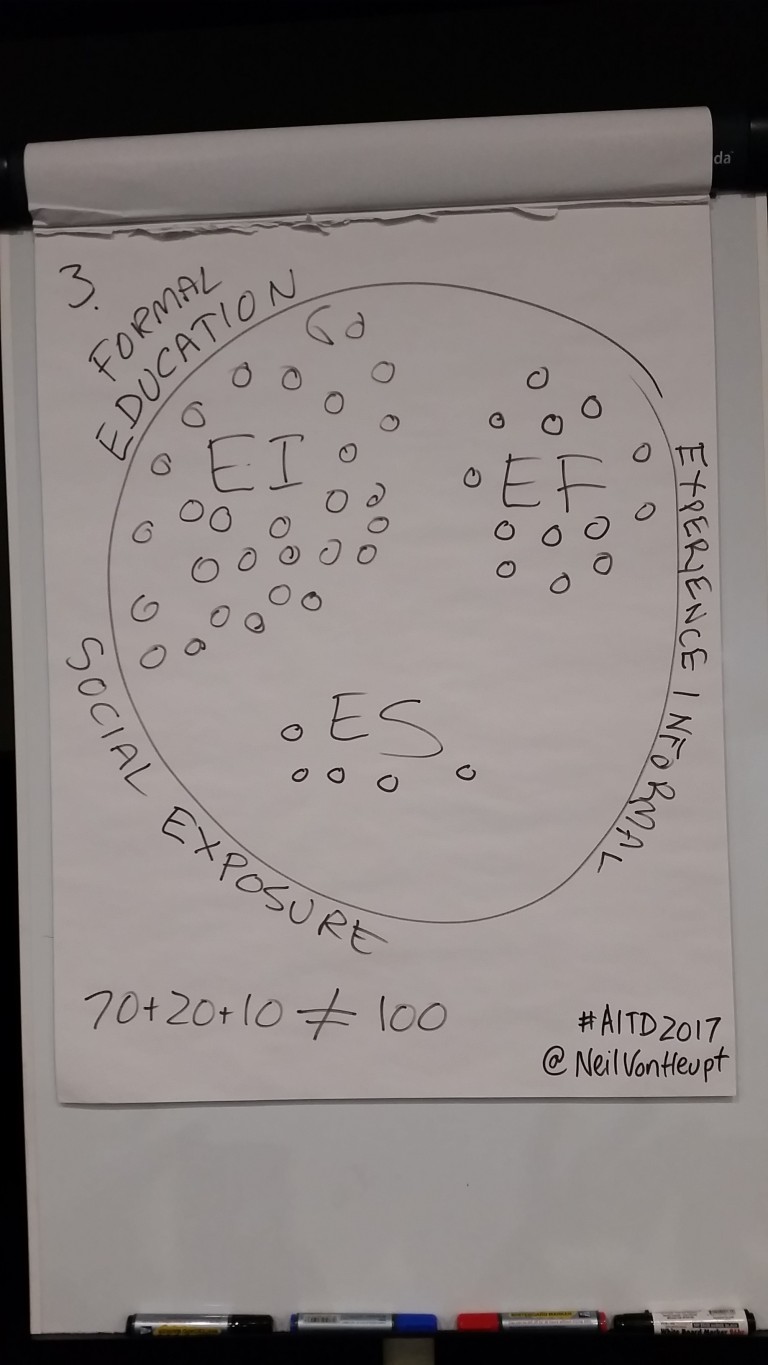 Divide this circle into four sections. Around the outside write ROLE, PROFESSION, INDUSTRY, CAREER. This is a similar exercise to the previous circle but we’re going to use concentric circles to map where your continuing professional development has been carried out.

If in any of these quadrants (25%) you have scored yourself with a zero, then that’s not actually a zero, it’s a negative, as the world of work is moving forward. You can’t be neglecting ANY of these quadrants, unless you are intentionally doing so to suit circle number two – your direction and priority.

We need to clear about circles three and four. They are both ways of filtering or reflecting on what we are currently doing for continuing professional development, but they are both subject to circle number two – the direction and the timeframe you choose. If your career direction is to be a University professor and you need a Ph.D then all your current CPD might be in formal learning for your career (which may overlap into your profession or industry). And that’s OK as it suits your direction and timeframe.

Most people in my experience are doing most of their continuing professional development just for their current role. Because the learning and development profession is carried out across multiple industries you may be working in an industry that you know little about or you may want to be working in another industry that you have experience or an interest in. This will influence what learning you plan. 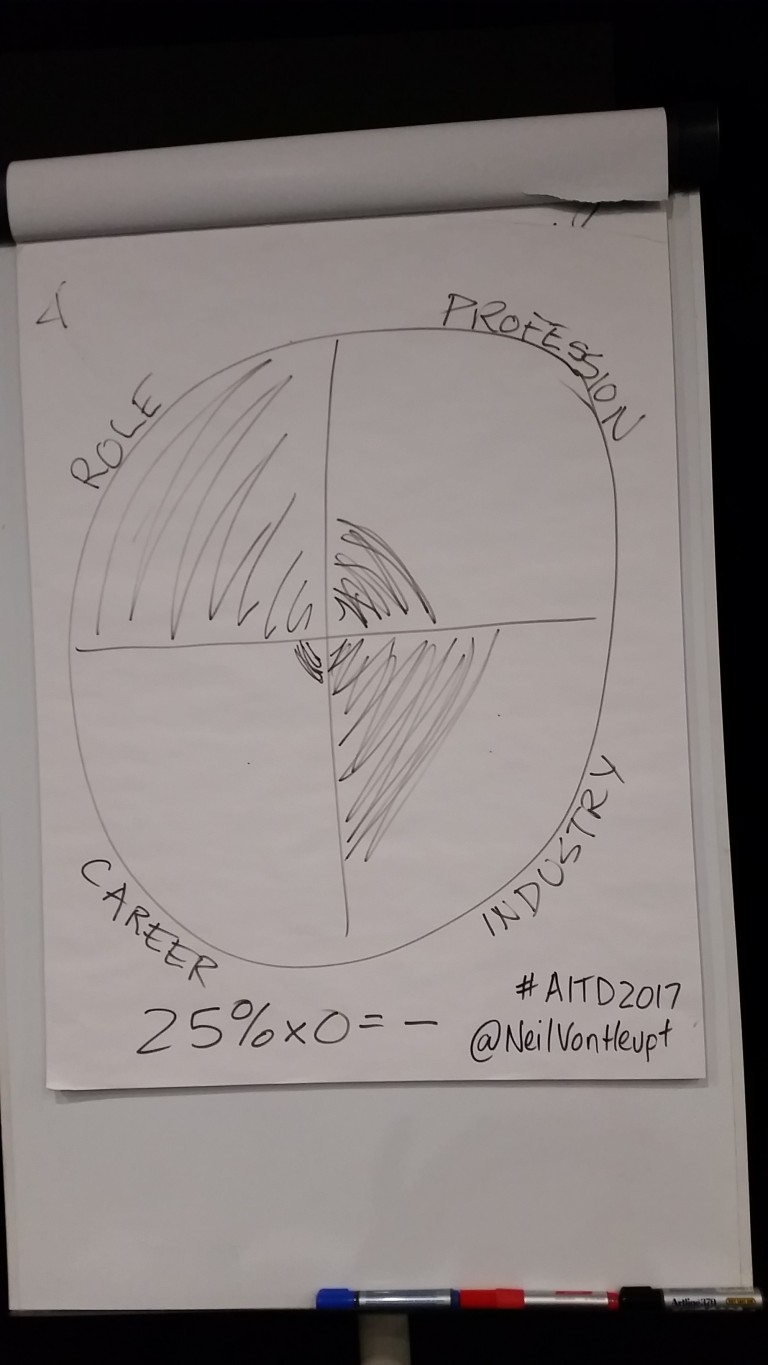 Pick up the last piccolo, but don’t drink it.

Number inside this circle from 1 to 5. That’s all I can do. I can’t fill in this circle for you as the final thing to do is to write a plan. The plan will be informed by the direction that you want to go, the timeframe in which you want to get there and the time you have available to give to it. The plan will be shaped by the range of ways in which it is possible to learn, and by the areas you need to focus on, again, shaped by the direction and priority concepts.

Now I’m not silly. Five double shot piccolos in 30 minutes would actually be risky. Either my heart would stop or my head would explode! So the question for the last circle with the 5 spaces in it, is in regards to your continuing professional development, are you silly? Will you be with the 37% of L&D managers who don’t have a plan?

It’s iced tea. Like I said. I’m not silly, with my coffee, or with my career.